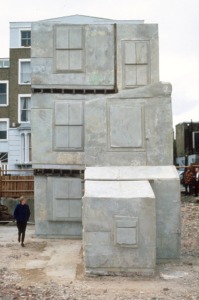 The eminent artist has placed a cast of a shed on New York’s Governors Island, evoking both Thoreau and Trump – a blow for art that takes the viewer by stealth.

America is a country of imagination and big dreams, some inspired, some twisted. It is the land of liberty, the open and optimistic birthplace of such diverse heroes as Amelia Earhart, Walt Whitman and Muhammad Ali. It is also home to the Unabomber, Donald Trump and Orlando killer Omar Mateen, sometimes a violent and vengeful country.

The artist Rachel Whiteread alludes to these extremes in Cabin, a concrete reverse cast of a wooden shed that will be unveiled to the public on 19 July on Governors Island in New York. “I was really thinking about Thoreau and the American Romantics, as well as the opposite of that – the grimmer, darker underbelly of America and the idea that some lonely person might live in a different way,” she says.

Cabin is the British artist’s first major permanent commission in the US and has been organised by the Trust for Governors Island and its public art program, Art CommissionsGI. It is a site-specific work created for Discovery Hill, one of “The Hills” – a 10-acre addition to Governors Island Park and part of a massive renovation effort to turn this once-military land into a pastoral resource for New Yorkers.