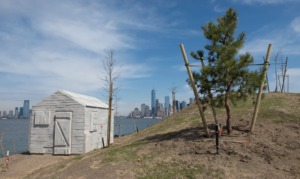 The odd thing about what she calls her “shy sculptures” – a cast house on an island in New York, one in Norway, another in Norfolk, two in the desert – is that rather than their massiveness, the inversion makes you realise how small a home is, its limits. Whiteread doesn’t do many interviews, and she is reluctant to talk about something even as dinner-partyish as housing, but she will say: “I’m interested in homes, in the politics of housing, but I’m no expert. I simply think it’s everyone’s fundamental right to have a roof over their head. We should be helping everyone to make a life – London can absorb many groups of people.”