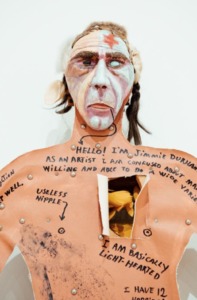 The sculptor’s retrospective at the Whitney Museum is a “brilliant, half-century-long act of politically driven self-invention,” our critic writes.

“I feel fairly sure that I could address the entire world if only I had a place to stand,” the peripatetic American artist Jimmie Durham said in the 1980s. Now he has that place: the fifth floor of the Whitney Museum of American Art, where his magnetic traveling retrospective has arrived with a comet trail of controversy.

The controversy, like many attached to art are these days, is about identity and ownership: who has the right to do and say what. Mr. Durham, 77, is widely perceived as a Native American artist, maybe theNative American artist. He has often spoken of himself as Cherokee; his work has made frequent references to indigenous culture.

But when the retrospective, “Jimmie Durham: At the Center of the World,” moved from its originating institution, the Hammer Museumin Los Angeles, to the Walker Art Center in Minneapolis, several historians raised objections to his ethnic claims, asserting that there’s no evidence that he is Indian at all.