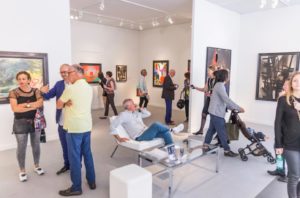 Think art fairs are all about sold-out booths, comfortable shoes, and exclusive dinner invitations? Think again. For many small to mid-size galleries, fairs—like Art Basel in Basel, which opens to VIPs today—are an increasingly nail-biting gamble that involves paying hundreds of thousands of dollars up front with no guarantee of a payoff.

As the middle market shrinks, many dealers are finding they can’t afford to do fairs—but they can’t afford not to, either. “It’s very hard to estimate what the revenue will be, so a gallery’s decision to do a fair is highly uncertain,” says Olav Velthuis, a professor at the University of Amsterdam who specializes in economic sociology. “People don’t realize that fairs are loss leaders for many small galleries.”

Indeed, fairs—which multiplied from 55 worldwide in 2000 to at least 180 in 2014, according to the 2015 TEFAF art market report—pose an economic riddle for mid-market dealers. It doesn’t cost that much less money for a small gallery to participate in a major fair than a large one, but the stakes are much higher for small businesses. The potential upside, meanwhile, is far greater for large ones. (See the end of this article for a breakdown of galleries’ costs and revenue at Art Basel in Miami Beach.)