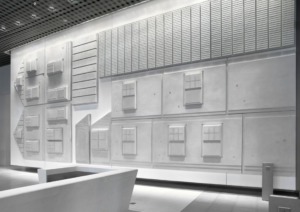 Sections of an all-American home have been mounted on the walls.

A major new public art work by Rachel Whiteread modelled on a suburban US house will be unveiled next week at the new US Embassy in Nine Elms, south London. The wall sculpture, titled US Embassy (Flat pack house; 2013-1015), will greet embassy visitors as they enter into the lobby through the consular court. The work was commissioned by Art in Embassies, a US governmental body.

Virginia Shore, the curator for the London Embassy project, tells The Art Newspaper: “The work uses the motif of the average American House, the type that may have been purchased from a catalogue in the 1950s; a familiar house that lines the suburban streets of America and would have appealed to a family of modest means.”