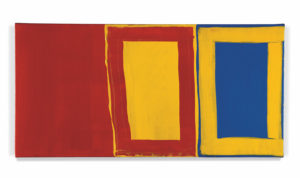 When Clement Greenberg, Frank Stella, and Donald Judd tried to define what makes a painting, they overlooked a central feature — capaciousness.

It is routine to characterize the 1970s as a decade dominated by Conceptual Art, and artists such as Sol LeWitt, Lawrence Weiner, Joseph Kosuth, and Mel Bochner. Part of this thinking is market-driven: the phenomenon of a group of artists who conveniently fall under a single heading and who steadily gain attention over the course of a decade. In 1978, LeWitt had a mid-career retrospective at the Museum of Modern Art. Critics described Conceptual Art as the next logical step after Minimalism while suggesting that artists engaged with painting did three things wrong: they worked in an obsolete form; they did not go beyond the reductiveness of Minimalism in a way that could be labeled; and they did not accept Donald Judd’s dim view of painting:

The main thing wrong with painting is that it is a rectangular plane placed flat against the wall. A rectangle is a shape itself; it is obviously the whole shape; it determines and limits the arrangement of whatever is on or inside of it.