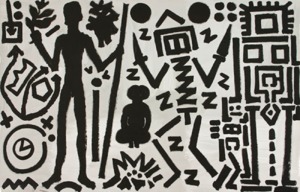 In 1985, A. R. Penck told curator Klaus Ottmann that he didn’t miss East Germany, where he had been born in 1939 and from which he was exiled in 1961. East Germany, Penck said, “disappeared in a black hole”—it was totally behind him. But, of course, his homeland and everything he lost when he left it stuck with him for the remainder of his life, which ended Tuesday when the Neo-Expressionist artist died at 77 of “a lengthy illness.”

For the past five decades, Penck explored how signs, numbers, and symbols could become abstraction. Like his Neo-Expressionist colleagues Georg Baselitz, Jörg Immendorff, and Markus Lüpertz, Penck relied on a style that appeared childlike, even at times resembling cave paintings and outsider art. His paintings, drawings, prints, and sculptures attempted to find a universal language—one that could address the trauma, sadness, and loss that followed World War II but that would also affect viewers beyond Germany.