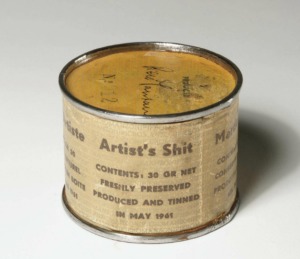 By way of example, Piero Manzoni,  “Artist’s Shit”:  “If collectors want something intimate, really personal to the artist, there’s the artist’s own shit, that is really his,” this Italian artist wrote of this work from 1961. An edition of 90, it’s quite simply a series of cans plainly labeled to advertise their contents: 30 grams of crap, presumably Manzoni’s. (The Italian — “Merda D’Artista” — makes it sound so much more refined.) Pundits have famously argued over whether this purported fecal sculpture is authentic, or a load of (metaphorical) shit.