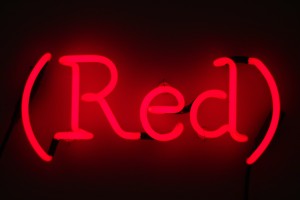 For artist Joseph Kosuth, neon isn’t a means for glitzy spectacle; for him, it is a serious instrument for conveying deep philosophical ideas. He can’t help it, however, if spectacular sights arise from a long career’s worth of rigorous thinking.

All reflect the probing and playful work of Mr. Kosuth, who helped pioneer the movement known as conceptual art beginning in the mid-1960s. Some of his early touchstone works are on view in the big retrospective, which closes after Saturday, while others can be seen in a smaller show uptown at Castelli Gallery, running until Feb. 19. Those works charted a course that led Mr. Kosuth to the conclusion that, in art, ideas are more important than objects.

“If you begin with the presumption that artists work with meaning, not with forms and colors, you get a whole other approach for seeing art,” said Mr. Kosuth, 70 years old. “The idea was to get rid of the aura around the work of art. It’s a burden, and we don’t need it.”