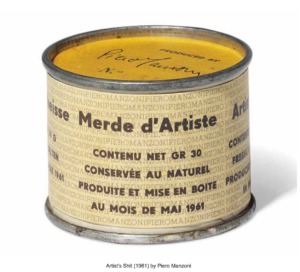 In January 1957 the 23-year-old aristocratic Italian artist Piero Manzoni visited an exhibition of Yves Klein’s blue paintings at Galleria Apollinaire in Milan. Manzoni had been a fairly conventional painter up until this visit. Yet, Klein’s display of canvas after canvas of unfaltering blue altered the way the young Italian saw and made art.

If Klein’s blue paintings worked as art – and they certainly had the desired effect on Manzoni – then why couldn’t other plain, apparently lowly creations also serve as a freer kind of art?

“Why not empty this receptacle, free this surface, try to discover the unlimited meaning of total space, a pure and absolute art?” he later questioned. “Expression, illusion, and abstraction are empty fictions. There is nothing to be said. There is only to be, there is only to live.”