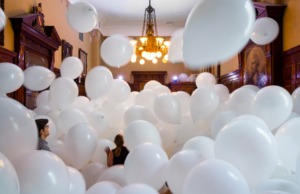 If Martin Creed had been alive in Medieval Europe, it is easy to imagine him as an admired court jester, entertaining the royals with dashes of absurdity while at the same time speaking truth to power, gingerly prodding the monarch. Creed delights in tweaking, and even flouting, convention. He hatches harebrained schemes—usually just single, simple ideas, if we’re being honest—and executes them with absolute commitment. Against all odds, his deadpan Duchampian strategies spill over into profundity.

Everyone knows Creed’s most famous work, Work No. 227, The Lights Going On and Off (2000–01). At his magnificent survey, “The Back Door,” which runs at the Park Avenue Armory in New York through August 7, it is stationed in a stately little room with a small door that is continually opening and closing, which is another Creed work (you may guess its title). His art is one of constant, extreme change: on or off, opened or closed. It is about things, situations, people that are here one minute and gone the next. It invites you to live in the moment, for a moment, between those states.

Good retrospective exhibitions deftly assemble an artist’s work to tell a story that we know parts of but want to hear in full; great ones offer up myriad new tales by presenting old work in fresh ways. This is a great show. Curated by Tom Eccles and Hans-Ulrich Obrist, it marshals a solid selection of Creed’s greatest hits along with plenty of lesser-known nuggets, tucking them into the intimate and out-of-the-way sections of the Armory that are not often used in the art shows staged there. It renders familiar art and architecture deliciously uncanny.