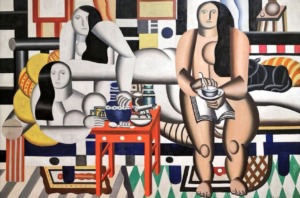 Heralded as the most innovative and instrumental avant-garde movement, Cubism aggressively confronted Western core conceptions of pictorial representation. Cubist paintings introduced the most revolutionary chapter of art history, instigating a genuine cultural awakening. Representatives of this movement, namely Picasso and Georges Braque, aimed to revitalize the tired standards of art which they believed had run their course. Through their vocabulary of cubes, cones, spheres and cylinders, Cubist paintings abandoned perspective which had been used to depict pictorial space since the Renaissance.

The creative duo of Picasso and Braque established a visual language of geometric planes and compressed space that rejected the conventions of illusionism and representation. Insisting that a subject must be displayed from several angles at once by utilizing geometrical components was the biggest game-changer the art world had seen so far. Initial works of Braque and Picasso comprise what art historians usually refer to as the first phase of Cubism known as Analytic Cubism. At the heart of this early stage of the movement was reduction and fracturing of objects that was followed by a realignment of those newly formed elements within a shallow space. The second main phase of Cubist paintings emerged in 1912 when Picasso glued a piece of oilcloth to a small canvas and named it Still-life with Chair-caning. Besides initiating the Synthetic Cubism stage, this piece was also the first collage artwork of the movement. The Synthetic style kept the various angles, open forms and flowing of space between and through subjects, but it also explored the use of non-art materials as abstract signs. As evidenced by some of our examples below, the second phase of Cubist paintings was a lot more aware of current events, particularly the horrors of World War I.