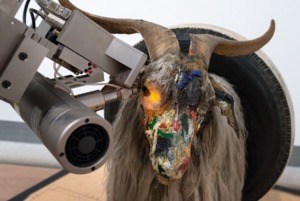 When the US artist and animal lover Robert Rauschenberg (1925-2008) saw a stuffed Angora goat in the window of a junk shop near his New York studio in 1955, he knew he had to have it. The shopkeeper wanted $35 for it, Rauschenberg paid $15 on account and, when Calvin Tomkins’s biography of the artist was published in 1980, he had yet to return to pay off the balance. The animal is a key component of his work Monogram (1955-59): a goat, standing on a painting, with a painted face and a rubber tyre around its middle.

When the Tate was planning its sweeping survey on Rauschenberg, Monogram was high up on its wish list. “We knew it had to be there,” says Achim Borchardt-Hume, the director of exhibitions at London’s Tate Modern, where the show opens on 1 December and then travels to New York’s Museum of Modern Art (MoMA), which is co-organising the show, and finally to the San Francisco Museum of Modern Art. But Monogram is fragile and so rarely leaves Stockholm’s Moderna Museet, which presented a potential snag in the Tate’s plan. Before Swedish conservators would give it permission to travel, the piece was subjected to a series of non-invasive scientific tests to assess its condition and learn more about its technical composition.