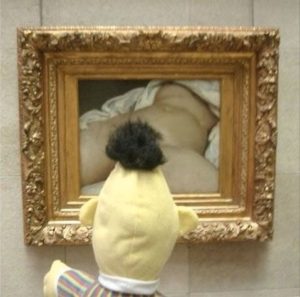 Our most-read story of 2016 was about Facebook’s legal battle over the French master’s work. Here’s why it still causes a stir, 100 years on.

Gustave Courbet’s The Origin of the World (1866) a painting of a woman’s “lower groin” (bas-ventre), as the writer Edmond de Goncourt coyly described it in June 1889, is as beautiful as it is brazen. Courbet’s model is portrayed only by her vulva, her thighs parted so as to reveal vaginal lips, offset by black pubic hair, a white sheet, and the pink flesh of her lower breasts. As the title confirms, Courbet pays homage to the origin of life and the world as we know it, but in the process he stages a call to arms for a radically new realism too.

The painting has remained closely guarded by the Musée d’Orsay since its acquisition in 1995, and so the recent public and critical attention is long overdue. Where Courbet has been rightly viewed as a key painter in the birth of modern art, the time has come to appreciate just how much he revolutionised the long tradition of the female nude.