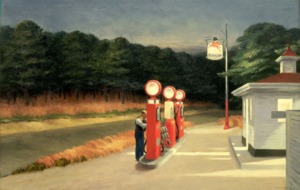 The sedan careers up the hill on a country road, slewing as a truck comes over the rise. We have a death’s-eye view, watching it happen. Everything slows down – a car pootling toward the sedan from behind, the oncoming truck going so fast its wheels have left the road. A storm is moving in, the fence-posts and telegraph poles, like ominous crosses on the hill, rearing.

You don’t expect such graphic, cartoon action from Grant Wood, painter of ruralist, idealised farmsteads and small-minded Daughters of the American Revolution. The last time anything exciting happened was when Wood painted Paul Revere galloping through town and hollering, waking everyone up.

Curated by Judith A Barter of the Art Institute of Chicago, and drawn from many US collections, America After the Fall looks at American painting from the Wall Street crash and the great depression to the second world war. In no more than 50 paintings this fascinating show charts the turbulence of American society, its inequalities and divisions, its fears, fantasies and insecurities, during a period of both national and international upheaval. Sound familiar?