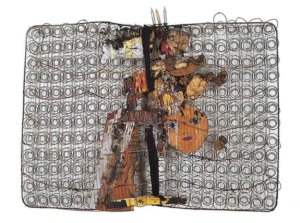 Revisiting the irony of the original Dada movement, Neo-Dada was first popularized in the early 1960s. The label has been applied to a wide variety of artistic works, mostly including Junk art, use of found objects and the employment of banal activities and objects as instruments of social and aesthetic critique. The most popular names behind this vast spectrum of art are Robert Rauschenberg, Jasper Johns, Merce Cunningham, John Cage, Jim Dine, John Chamberlain, Ray Johnson among many others who have ventured into this ambiguous form of expression. Recently, we’ve addressed the history and the awakening of Neo-Dada, where we’ve explored in-depth exactly how such a movement came to life, and what were the motifs behind it. Many art theorists and critics would say that Neo-Dada styles and ideas affected other artistic forms and movements such as Pop art, Junk art, Fluxus and Nouveu Réalisme, as well as several other contemporary art forms like assemblage, performance and installation. Here, we take a look at the 10 Neo-Dada art pieces that left a significant mark in the development of this movement, and many others.