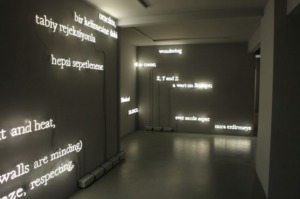 The Conceptual art movement is probably the most radical and the most controversial plane in modern and contemporary art. Some artists, experts and art historians even dismiss it as art. Conceptual art is based on the notion that the essence of art is an idea, or concept, and may exist distinct from and in the absence of an object as its representation. Many examples of conceptual art (well-known works or statements) question the notion of art itself. Some conceptual artists believe that art is created by the viewer, not by the artist or the artwork itself. Since ideas and concepts are the main feature of art, aesthetics and material concerns have a secondary role in conceptual art. Conceptual artists recognize that all art is essentially conceptual. In order to emphasize these terms, they reduce the material presence of the work to an absolute minimum – a tendency that some have referred to as the dematerialization of art – which is one of the main characteristics of conceptual art. As many conceptual art examples show, the conceptual art movement itself emerged as a reaction against the tenets of formalism. Formalism considers that the formal qualities of a work – such as line, shape and color – are self-sufficient for its appreciation, and all other considerations – such as representational, ethical or social aspects – are secondary or redundant.