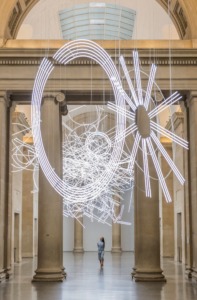 The Welsh artist unveils 2km of neon suspended in mid-air – and it’s an adventure playground for the eyes.

It all begins with a white neon O, hanging above our heads like the shape the lips make before an exclamation. Or a spyglass aimed at the chaos beyond.  Suspended partway down the long Duveen Gallery at London’s Tate Britain, it reminds me most of an acrobat’s ring; the eye swings through it, leaping into a dense tangle of white light that smears the floors with brightness, and seems to fill the space beyond. Cerith Wyn Evans’s Forms in Space … By Light (in Time), the latest annual commission for the Duveen, is less to be looked at than moved through, a work to be paced, walked under, experienced as a journey or a piece of music. What begins as optical confusion unfolds as a sequence of complex manoeuvres, reversals, mirrorings and inversions. If the title sounds a bit dry – like some glum suprematist exercise – the work is anything but.

We have seen a lot of neon in art. Neon heads and neon words in Bruce Nauman; neon obscenities from Jason Rhoades; Ragnar Kjartansson’s Scandinavian Painand Martin Creed’s Mothers. Neon is just a drawing tool. The lights do not go on and off here, though the eye flickers, being sent through hoops and on zooming trajectories. At the rear of the Duveen, at roughly the same height as that first hanging circle, a plain neon rod thrusts towards the wall. An emphatic sudden stop, a gesture arrested, an invitation to reverse.