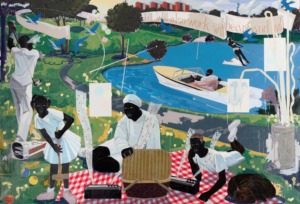 Born in Birmingham, Alabama, Kerry James Marshall taught himself to draw and made his first paintings in Harlem YMCA. As a major retrospective opens in LA, he talks about taking on the Old Masters.

The day before the crowds get in to his critically praised retrospective, Kerry James Marshall is walking around the Museum of Contemporary Art in Los Angeles, taking in 30 years of his work. Wearing a casual green T-shirt and slacks and with his visitor badge still attached, he looks more like a tourist who has wandered into the wrong exhibition than one of America’s most revered contemporary artists. Although his work is known for its challenging nature, you get the impression he’s content with his lot. “I see myself as having fulfilled a lot of my ambition,” says Marshall. “All the things I dreamed of achieving, I’ve achieved for the most part.”

Born in Birmingham, Alabama, Marshall moved with his family to Los Angeles and grew up in Watts and South Central during the 1960s. He enrolled in drawing lessons, cribbed from art shows on TV and copied the work of various people including Charles White, who would become his teacher at the Otis Art Institute in LA. He moved to New York in the 80s after being awarded an artist-in-residence fellowship at the Studio Museum in Harlem. It was there, while staying in the same YMCA that Malcolm X checked into decades earlier, that Marshall began painting his large-scale figurative works.