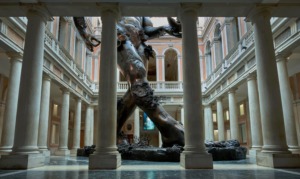 It has made Damien Hirst rich, colossally so, and now it has done something else. It has redeemed him. For years he has appeared a figure of strangely wasted and ruined promise, whose commercialism snuffed out his artistic spark. Yet with his exhibition Treasures from the Wreck of the Unbelievable, which fills not only a Venetian palace but also the capacious halls of the ship-shaped Punta della Dogana at the mouth of the Grand Canal, the arrogant, exciting, hilarious, mind-boggling imagination that made him such a thrilling artist in the 1990s is audaciously and beautifully reborn.

The young artist who put a tiger shark in a glass tank never died, after all, and we who lost faith in him look like fools for failing to believe.

This fictional museum is not only impressive, but moving. Hirst shares his passion with us. He obviously loves art, loves the dark and inexplicable mystery of it. He communicates, too, a love of history – or perhaps, rather, a love of time. Art is changed by time as wrecks are changed by the sea. Today’s spoon is tomorrow’s wondrous relic.

Will Hirst one day be in the history books as a genius? It looks a hell of a lot more likely after this titanic return to form.