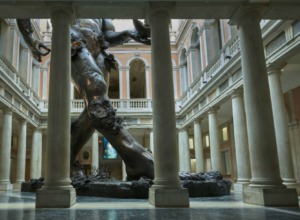 It’s not hard to see why Damien Hirst’s latest project has been hailed as the British artist’s most important to date. And in fact it is so ambitious and such a departure from anything else he has done that it could just be the work that cements his status as one of the greatest artists of his generation. Ambitious, excessive, and audacious at its core, it’s not just one of Hirst’s greatest achievements, it is arguably one of the greatest achievements in contemporary art.

Titled “Treasures from the Wreck of the Unbelievable,” the new project marks the first time that both of the Pinault Foundation’s Venetian venues, the Palazzo Grassi and Punta della Dogana, have been dedicated to a single artist. Almost ten years in the making, the exhibition takes its title from the grand narrative around which it is centered – a story that consists of elements of myth, fantasy, and factual history, mixed in the cauldron of Hirst’s overactive imagination.

In an art world era of exhibitions exploring the guilt-inducing but highly important and relevant issues of the refugee crisis, war, famine, migration, poverty, racism, and gender, “Treasures from the Wreck of the Unbelievable” is somewhat of an antidote to all the doom and gloom. It’s a spectacular and theatrical masterpiece of creative genius that proves that something joyful, whimsical, and indulgent can also be intelligent and intellectual.