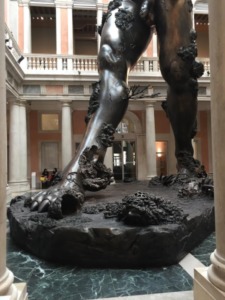 Damien Hirst sold a lie, and he sold it very well.

In the weeks leading up to his grand exhibition that now occupies all of the Punta Della Dogana and Palazzo Grassi in Venice, he gave out very little information: just a series of teasers on social media—Instagram footage of divers resurrecting unknown objects from the ocean—and a silly title, “Treasures of the Wreck of the Unbelievable.” On the day of the show’s preview, curator Elena Guena narrated the fairytale of Cif Amotan II, the first-century Antioch freed-slave-turned-art-collector whose ship, the Apistos (Greek for “unbelievable”), had sunk into the Indian Ocean 2,000 years ago along with his colossal wealth of art and artifacts. In 2008, the story goes, his wreckage was discovered. These were his treasures, which Hirst himself had painstakingly lifted from the bottom of the ocean to put on display here.

In the spirit of the patron god of metallurgy, Hirst has fabricated a set of gaudy wonders, as well as a fiction complete with provenance and a redemptive narrative. Myths, of course, have a way of superseding the splendors of the material world. It is certainly true in the case of Hirst. As an artist who’s already exhausted the possibilities of reality, his natural next step was to invent his own legend.