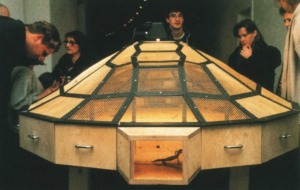 The curator explains the origins of the exhibition and the thinking behind its most controversial elements.

Now well ensconced at the Solomon R. Guggenheim Museum as its Samsung Senior Curator of Asian Art, Munroe is trying to repeat that feat with recent Chinese art history, working with two co-curators—the widely respected experts Hou Hanru and Phillip Tinari—to chart the arc of conceptual art in China between 1989 and 2008 in “Art and China after 1989: Theater of the World.”

Now, a week before it opens to the public, the show is already proving problematic.

Intending to show how artists captured the violent change and bestial tumult of the two decades charted by the show—set in motion by the shattered hopes and bloodshed of Tiananmen Square and capped by the controversial Beijing Olympics, which announced both the undeniable ascent of China as a world power and its retreat from international humanitarian norms—the curators included several works that involved animals menacing or even killing one another.