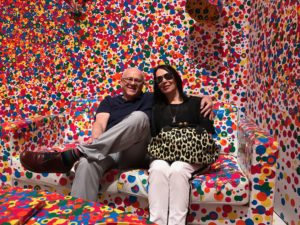 The artist of “Infinity” rooms has become an Instagram darling.  But two new gallery exhibitions in New York show that she’s much more than that — an almost frighteningly fertile talent.

Sometimes I think Yayoi Kusama might be the greatest artist to come out of the 1960s and one of the few, thanks in part to her long life, still making work that feels of the moment. Other times I think she’s a bit of a charlatan who produces more Kusama paintings than the world needs and stoops to conquer with mirrored “Infinity” rooms that attract hordes of selfie-seekers oblivious to her efforts on canvas.

Ms. Kusama’s current three-ring circus of exhibitions at David Zwirner’s uptown and downtown spaces — which include 76 works on canvas — argue in favor of greatness.  On all fronts, Ms. Kusama has a formidable urge toward art and fame fueled by what seems to be a steely will and also a great mental focus — partly a function of psychological imbalances that have led to periods of hospitalization. (She began to experience visual and auditory hallucinations as a child and they continue.) She has characterized art as her chance for salvation both here and in the afterlife.