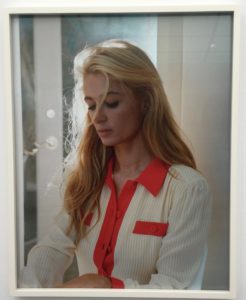 One of the most striking images in the new retrospective of Torbjorn Rodland’s photographs currently on display at C/O Berlingreets visitors as they enter the exhibition. It is a picture of a young woman, lit from the side by a powerful red light, with honey streaming down her cheeks onto her chin. Like many of Mr. Rodland’s works, the image — titled “Goldene Tränen,” or “Golden Tears” — looks like the kind of high-gloss photograph that might appear on a billboard or in a magazine advertisement, but it is unsettling in a way that can be hard to pin down.

Sitting on a windowsill in the gallery, Mr. Rodland explained that the photograph was meant to arouse a variety of reactions depending on a viewer’s cultural interests. An art historian, he said, might see it as a reference to the weeping Virgin Mary, while a 22-year-old consumer of online pornography would see something more obscene. “If there’s only one possible reading of a photograph, then I’m less interested,” Mr. Rodland added. “The photographs are reading you if you’re reading them.”