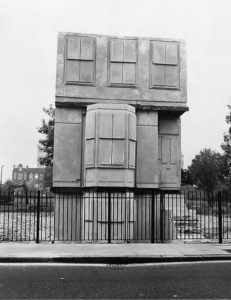 British minimalist sculptor Rachel Whiteread (b. 1963) is known for her innovative use of negative space as sculptural object.  Most renowned for her plaster casts of architectural spaces and utilitarian found objects, Whiteread’s haunting, tomb-like works evoke themes of loss, memory, and invisibility.

Whiteread’s work is currently on view at Monnaie de Paris as part of the Women House Exhibition, which features the work of 39 artists whose work explores the relationship between gender and space; particularly that of the female to a domestic space. She also has a solo show at the Tate Modern in London, closing on January 21. In honor of the artist’s concurrent shows, we’ve revisited an excerpt from Phaidon’s Speaking of Art: Four Decades of Art in Conversation, in which Whiteread spoke with contemporary art critic Michael Archer in 1992 about developing an extensive vocabulary of sculptural mediums, how site-specific works translate into new spaces, and how the installation of a piece can alter its meaning.