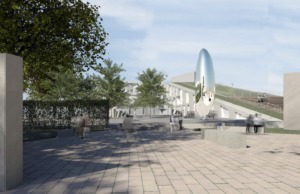 “I think much more than ‘Cloud Gate,’ ‘Cloud Column’ is meant specifically to capture the heavens and bring them down to earth” .

The Museum of Fine Arts, Houston (MFAH) unveiled a new outdoor sculpture on Monday, a monumental reflective piece by Anish Kapoor that immediately brings to mind his iconic “Cloud Gate” in Chicago, more widely known as “The Bean.” The sculpture, known as “Cloud Column,” now stands on the newly developed plaza of the museum’s teaching institute, the Glassell School of Art. Never before displayed in public, “Cloud Column” is actually a precursor to “Cloud Gate,” and it stands upright rather than curve over the ground.