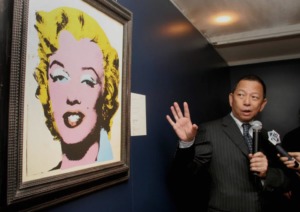 Asian, postwar, and fine art are by far the most bankable categories in Hong Kong.

In recent years, Hong Kong has transformed in the eyes of the Western art industry. Formerly a destination that warranted attention primarily during Art Basel Hong Kong and a few scattered auctions, the region now hosts permanent spaces from many of the most powerful galleries in the world, while Christie’s, Sotheby’s, and Phillips are all seeking to expand their influence there in various ways.

So far, this season’s auction results suggest that the market’s steady expansion shows no sign of abating. Sotheby’s Hong Kong closed its main group of spring auctions on April 2 with $466.5 million in reported sales across all categories (and one epic, 40-minute bidding war). The vast majority of the total owed to continued strong performance in fine art sales, which generated just shy of $385 million.  While not an all-time high, that haul is among the highest since 2012 (the first year of data available from Hong Kong in the artnet Price Database).