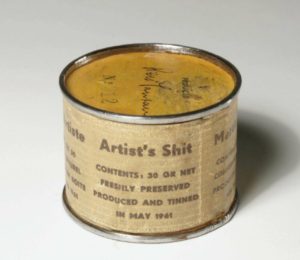 “I am sick of the art-adoration that prevails among cultured people, more in our time than in any other:  that art silliness which condones almost any moral or intellectual failing on the artist’s part as long as he is or seems a successful artist.  It is still justifiable to demand that he be a successful human being before anything else, even if at the cost of his art.  As it is, psychopathy has become endemic among artists and writers, in whose company the moral idiot is tolerated as perhaps nowhere else in society.”

– Clement Greenberg, “The Question of the Pound Award,” Partisan Review, 1949

Psychoanalysts haven’t been particularly happy with avant-garde art.  Even as some have tended to mythologize the artist as a superior being, others have criticized avant-garde art for its regressive nihilism.  Thus we have Julia Kristeva’s extravagant, even absurd assertion that “freedom does not seem to exist outside of what we agree to call an ‘artist’.”(1)  Erich Fromm goes even further, calling the artist the only “spontaneous…integrated personality”—the very model of mental health, as it were.  “Spontaneity is a relatively rare phenomenon in our culture,” Fromm writes, but the artist’s “thinking, feeling, and acting” is a spontaneous expression of himself because he alone has “positive freedom.”(2)  This adulatory privileging—idealization—of the artist is not without precedent.  Many avant-garde artists agree.  Wassily Kandinsky, for example, speaks, with self-congratulatory fervor, of the “unlimited freedom, depth, breadth, a wealth of possibilities” in avant-garde art.(3)  Nonetheless, what Kristeva and Fromm write is no more than a theoretical endorsement of the conventional modern idea that the artist is a totally free spirit.  And what Kandinsky writes seems more like a fantasy than a fact.  Can the artist and art escape every determinism to achieve unconditional freedom?  Even the gods are subject to fate.  Yet it seems clear that the avant-garde artist is in pursuit of what Meyer Schapiro calls “inner freedom”(4) or an “ideal domain of freedom.”(5)  Whether he has found it, as Kristeva, Fromm, and Kandinsky facilely think, is another question.