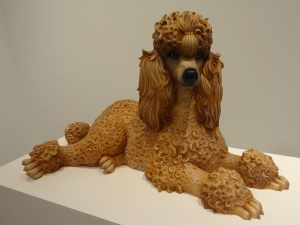 When sightings of Leonardo DiCaprio and Miley Cyrus (dressed as deranged vagabonds) at Art Basel in Miami cause a stir, one wonders what remains of the art world. Indeed it is tempting to think that the art world has been swallowed by the combined marketing and publicity machines of Hollywood and the fashion and music industries. Art is an accessory to wealth and stardom.

So much has changed in the art world so quickly, it is for many people disconcerting. A hundred years ago the art dealer Paul Durand-Ruel often purposely held onto the Impressionists’ artworks for so long so that his clients’ tastes could catch up (so it was said). Though that’s probably a polite way of saying that it took him a long time to be able to sell the Impressionists’ works to people who understood it, today, by extreme contrast, art sells in nanoseconds at art fairs to people who not only don’t understand it but really don’t care. The juice comes from the emotional rush of the competition for the purchase, plus bragging rights at dinner afterwards; it’s not the physical object that’s exciting.