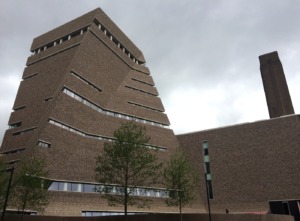 LONDON — The day began in the Turbine Hall, the 85-foot-tall atrium at the heart of Tate Modern, the most visited museum of modern and contemporary art in the world. If the museum functions like a medieval cathedral — as the Lord Browne of Madingley, chairman of Tate’s Board of Trustees, suggested in a packet of materials distributed to reporters — the Turbine Hall is the nave, a space for aesthetic parishioners to marvel at the wizardry of temporary, site-specific installations like Olafur Eliasson’s domesticated sun (“The Weather Project,” 2003–2004) or Doris Salcedo’s subterranean chasm (“Shibboleth,” 2007–2008).

On Tuesday, hundreds of reporters assembled for a sneak peek at the new wing, a 212-foot-tall pyramidal tower adjacent to the main building. Designed by Herzog & De Meuron, who developed the original Tate Modern 16 years ago, the Switch House is sheathed in a perforated lattice of 336,000 bricks, a slate-colored skin that rhymes with the brickwork of the Boiler House next door. The idiosyncratic structure is reminiscent of a crumpled paper cup that has been inverted and slashed by a capricious hand, with irregular bands of fenestration tracking the building’s contours. At night, the Switch House is lit from within, a 10-story concrete monolith calling to the dignified masonry of St. Paul’s Cathedral across the river.