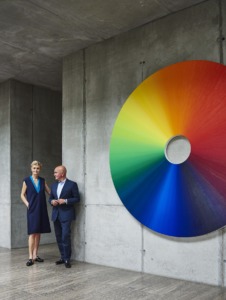 When the Berlin collector Karen Boros first visited the place she now calls home, in the late 1990s, she was “catapulted into a different world,” she recently told me. “People were running around in leather outfits and strange masks, and fog machines made it impossible to see.” At that time, the windowless bunker was a fetish-and-techno club with an infamous history: Built in 1942 under the direction of Albert Speer, it was designed as a Nazi bomb shelter. After the war it was used as a Red Army POW camp and, then, as an East German warehouse for storing bananas imported from Cuba. Later it hosted S&M nights and avant-garde performances. In 2003, when Boros, now 54, and her husband, Christian, 51, were searching for a spot for their sizable art collection, the empty, ugly concrete structure in the center of Berlin was for sale. “So we asked our artist friends: ‘What do you think of a Nazi building?’ ” Christian told me when I visited them in Berlin. “And they all said, ‘Of course! To change it with contemporary art would be the best.’ In Berlin, you don’t build a proud signature museum the way Eli Broad or Bernard Arnault did. You change a historical building.”