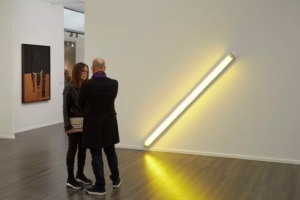 FALSE EQUIVALENCE: Although I always advise caution about these reports, sales at this year’s freshly entombed Frieze and Frieze Masters were allegedly strong from the jump. Numerous exhibitors were eager to broadcast their results (or at least, pretend to) on VIP preview night. But rather than resurrect the issue of dubious honesty from self-interested actors in a consequence-free environment, I want to focus on a different dimension of the sales process this time: specifically, the growing imbalance between two types of buyers who used to be evenly matched.

The point? More and more, suggesting budget equivalence between an institution and a “serious collector” is like suggesting that building a campfire produces as much heat as torching a lumberyard.