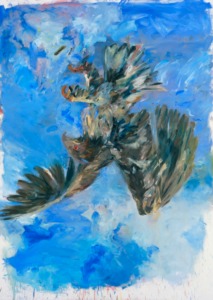 The Swiss-US retrospective will include early painting that shocked 1960s Germany, plus “exuberant and explosive” late works.

Georg Baselitz will get a US-Swiss retrospective next year co-organized by the Hirshhorn in Washington, DC, and Fondation Beyeler, near Basel. The show is set to kick off at the private museum in Switzerland on January 21—two days before the German artist turns 80.

His survey will feature more than 100 works from every period in his six-decade-long career, including paintings, such as his upside down German eagle, Fingermalerei – Adler (1972), sculptures, and works on paper, as well as new works. “He is a great painter who has been consistently good over the years,” Stéphane Aquin, the chief curator of the Hirshhorn, who is co-curator of the show, tells artnet News. He adds that the artist is enjoying an “exuberant and explosive” late period of creativity.