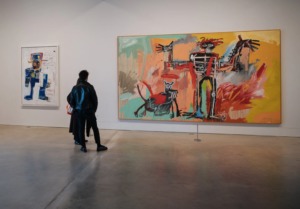 An exhibition at the Brant Foundation’s New York space reveals how much he had in common with Jenny Holzer and Hans Haacke.

Over the years, the biggest fans of Jean-Michel Basquiat have had a strange way of showing their affection: They’ve just about drowned him and his work in tired romantic clichés.

He’s supposed to be a tortured soul overflowing with passions that pour out through the tortured pictures he paints. One writer likened him to “a preacher possessed by the spirit,” an image that comes dangerously close to primitivist stereotypes. A curator insisted that Basquiat’s art channeled “his inner child,” the kind of talk that could easily veer into ideas of the Noble Savage. Basquiat himself complained that critics had an image of him as “a wild man running around—a wild monkey-man.”

To this day, he’s almost always billed as being more in touch with his emotions and the passions of urban life than with the orderly reasoning of post-Enlightenment culture.