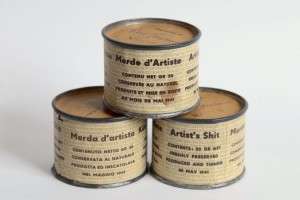 Tracey Emin‘s sculpture My Bed (1998) is exactly what it sounds like: the work consists of the artist’s freshly slept-in bed, with crumpled pillows, disheveled sheets, and dirty tissues and other junk (including sanitary items, prophylactics, and liquor bottles) strewn around the footboard. When it debuted at 1999 at London’s Tate, it created an instant commotion in the media—according to the Sunday Mirror, the piece prompted thousands of grumbling letters from readers about the “so-called art work.” Meanwhile, a “furious housewife” was apprehended by museum staff when she attacked the piece with cleaning products.

All of which is to say that My Bed is the kind of artwork that prompts the timeless response: But is it art? To which we reply: Of course it is—because Emin said so. But there’s more to the story. The key to fully understanding the complex operations of contemporary art that may, to the untrained eye, seem lawless and unskilled, is to understand the concept of “the readymade” in the history of 20th-century art.

Italian prankster conceptual artist Piero Manzoni famously challenged the idea of the readymade in 1961 when he made Artist’s Shit (Merda d’Artista). Manzoni’s specious claim was that he had actually canned and labeled his own excrement, poking fun at the idea that any item touched by an artist could be transformed into a great work of art—while also, ironically, taking the same notion to its logical extreme. His joke continues to be played out in the market: a can sold for $ 166,618 at Sotheby’s in 2008.