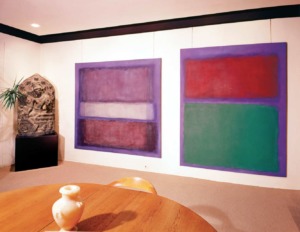 If you had Ben Heller’s eye, you’d have picked 50 straight Derby winners, or signed 100 future Hall of Fame ballplayers when they were 17. “When I think of my old apartment on the Upper West Side,” says the tall, spry Heller, who is 91, “even I’m shocked.” In the mid-1950s, the talent he was spotting was Abstract Expressionist, and the art he amassed and later sold would be worth about a billion dollars today.

In this living room at 151 Central Park West — where Heller lived from 1959 to around 1975 he had three Jackson Pollocks and one Barnett Newman. In the dining room was a Giacometti sculpture, a Kline, and a Johns. Also hanging around were works by Willem de Kooning, Arshile Gorky, Philip Guston, Robert Motherwell, Adolph Gottlieb, Mark Rothko, and Clyfford Still.