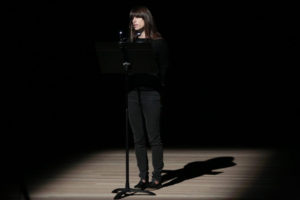 Magid will receive $50,000 cash and a residency at Calder’s former home and studio in Connecticut.

The Calder Foundation announced today that the New York-based artist Jill Magid has won the 2017 Calder Prize. The award comes with $50,000 cash and the promise to place one of the artist’s works in a major public collection.

Magid will also participate in a residency this spring at Calder’s former home and studio in Roxbury, Connecticut—a first for the prize. “I find it a very exciting invitation,” Magid told artnet News. “When I suggested to Sandy [Rower, the foundation’s president] that staying in Calder’s house might be like the experience I’d had staying in Luis Barragán’s house and studio in Mexico City, he disagreed, saying, ‘the Barragán house and studio is now a museum, and open to the public; Calder’s house is exactly how he left it. It’s as if he walked out to get a carton of milk and never came back.’”

“Although Calder and Magid appear to be polar opposites, the two artists share a common ground, drawing as they do upon immaterial notions as material—whether that be permission, as in Magid’s case, or chance, as in Calder’s—to reveal the complexities beyond transparency,” the foundation said in a statement.