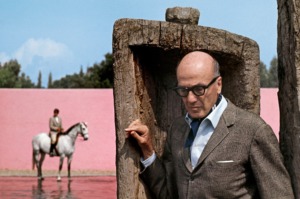 A conceptual artist devises an ingenious plan for negotiating access to a hidden archive.

Last September, in Guadalajara, an American conceptual artist named Jill Magid and a pair of gravediggers convened at the Rotonda de los Jaliscienses Ilustres, a monument where the most celebrated citizens of the state of Jalisco are entombed. With them were two notaries and a handful of bureaucrats. It was just after eight in the morning, and the area was nearly silent. The quiet was disturbed by the sound of chisels striking stone. The gravediggers removed a metal plaque, then a cement wall, and, finally, a brick façade. More than an hour later, they hit what they were looking for: an oxidized copper urn, filled with the ashes of Luis Barragán, one of Mexico’s greatest architects, who died in 1988. They removed the urn from the cavity, brushing off dust and ants. Then they opened the vessel and presented it to Magid, who scooped out half a kilo of what looked like dirt and transferred it to a plastic bag, which she then put into a box. The next day, with the box in her carry-on, she flew home to New York.