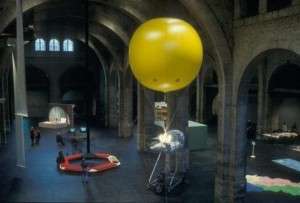 If the title of Jens Hoffmann‘s latest exhibition. “Other Primary Structures,” rings a bell, it’s because it’s a revisiting one of the most important American art exhibitions of the 20th century: “Primary Structures: Younger American and British Sculptors,” the 1966 exhibition organized at the same museum by the pathbreaking curator Kynaston McShine that changed the aesthetic course of American art. But “Other Primary Structures” is not simply a re-staging of McShine’s original show; instead, through life-sized reproductions of installation images, timelines, text, a scale model of the Jewish Museum’s original building, and a catalogue that cleverly duplicates the design and format of that from the 1966 show, it’s an investigation into the nature of the contemporary art exhibition as a cultural event that also seeks to correct the Western-male-centric scope of the original exhibition by including works by artists from outside of the United States and Europe.