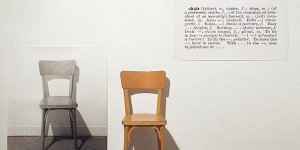 There has been a lot of bickering about what Conceptual art is/was; who began it; who did what when with it; what its goals, philosophy, and politics were and might have been. I was there, but I don’t trust my memory. I don’t trust anyone else’s either.  – Lucy Lippard, “Escape Attempts”

The term “concept art” was coined by Henry Flynt in a 1961 essay to describe “an art of which the material is ‘concepts,’” going on to state that, “concept art proper will involve language.” Was this new term known to the artist practitioners of the time themselves? Curator and writer Lucy Lippard thinks not in her essay “Escape Attempts,” adding that Flynt’s term was “in any case a different kind of ‘concept’—less formal, less rooted in the subversion of art-world assumptions and art-as-commodity.” To Lippard, the term conceptual art means “work in which the idea is paramount and the material form is secondary, lightweight, ephemeral, cheap, unpretentious and/or ‘dematerialized.’” Lippard does not deny conceptual art material form (yes, it can even involve paint) and by stressing the importance of the “idea,” she keeps conceptual art open to language-based work.

Sol LeWitt wrote “Paragraphs on Conceptual Art” for Artforum in 1967 and, like Lippard, focused on the “idea”: “What the work of art looks like isn’t too important. It has to look like something if it has physical form. No matter what form it may finally have it must begin with an idea. It is the process of conception and realization with which the artist is concerned.” Of course, he added, “Conceptual Art is only good when the idea is good.”